Council’s inaugural city centre heritage funds were awarded mid-February! This means that we should all be on the lookout for the next several months, as multiple heritage buildings in our city centre will be getting a refresh. The majority of applications were for items that are easily noticed by the public, such as window repair, cleaning, painting, scaffolding, verandah refurbishment, and signage. All the work, big and small, adds to the heritage character of our city centre.

How did we get here? 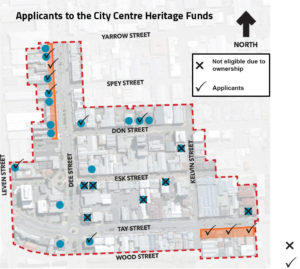 The City Centre Heritage Steering Group was established in August 2018. Its purpose is to provide a coordinated approach to the support, promotion, and preservation of heritage within the city centre. The steering group drafted the 2019 City Centre Heritage Strategy, which outlines actions to be taken during the next four years to support city centre built heritage, and in March 2019 the strategy was adopted by Council.

Two Council-funded city centre heritage funds were created with an allocation of $100,000 this year and $250,000 annually for the next three years. A third, one-time fund, was created from the ILT resource consent condition to provide Council with $50,000 towards the support of heritage in the city centre.

Of the 30 buildings identified in the strategy, seven are not eligible for funding due to ownership (owned by Council or Heritage New Zealand). We received ten applications (43% response rate) for the two Council-funded funds (City Centre Built Heritage Fund and City Centre Seismic Strengthening Fund). The total amount requested was $157,360, which was oversubscribed by $57,360. Eight applicants were successful, receiving a portion of the $100,000 budget.

We received nine applications (39% response rate) for the ILT-funded Façade Enhancement Fund. The total amount requested was $61,199, which was oversubscribed by $11,199. Eight applicants were successful, receiving a portion of the $50,000 budget.

The steering group foresees the applications becoming more complex each year as owners complete their general maintenance repairs and move on to building upgrades and adaptive re-use projects. Overall, Council is very pleased with the response rate and that several owners are already discussing their future projects with Council’s Heritage & Urban Design Planner.

A full list of award amounts and details can be found at www.icc.govt.nz/heritage/heritage-funding