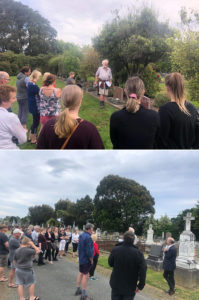 On Sunday the Bluff History Group led a tour of Old Bluff Cemetery as part of our Cemeteries and Crematoria Week events. About 100 people turned up and were divided into two groups, with local historian Jan Mitchell and Bluff Maritime Museum Curator Trish Birch taking the tours.

We went from Bluff’s (probably) most famous former resident in Joseph Ward, who was twice the Prime Minister of New Zealand, to sea captains, early settlers and local identities, to an unknown baby grave which is thought to be the first internment at the cemetery.

Fantastic weather on Monday brought about 30 people to Eastern Cemetery to join a tour led by Lloyd Esler.