The long awaited Suqian Friendship Garden in Queens Park is now open to the public.

The most recent addition to Queens Park, the completion of the Chinese Garden marks another milestone in the long-running relationship between Invercargill City and Suqian City of Jiangsu province in China.

Since forming sister city ties in November 2013, both cities have interacted and developed in the fields of education, sports, culture and trade.

From this relationship the two cities built and developed gardens symbolising mutual friendship and cooperation.

Invercargill City Councillor Alex Crackett was delighted by the new garden, and enthusiastic about the value it created for the city.

“The finished Chinese Garden is a vision of serenity,” Councillor Crackett said.

“Not only has it strengthened a vital relationship for Invercargill, it’s also a great addition to Queens Park which was already one of the jewels in our crown.”

As part of the exchange, Suqian City provided the initial design plans and gifted Invercargill the Friendship Bronze Cauldron – the centrepiece of the gardens.

In exchange, Invercargill provided its own design for the Invercargill Garden in the Santai Mountain National Forest Park, as well as the gift of ventifacts – unique stones sculpted and polished by long-term exposure to wind-driven sand.

Councillor Lesley Soper praised the hard work from everyone involved in getting the project completed.

“The finished garden is a credit to the parks staff who worked so hard to achieve such an amazing outcome, with all five of the elements of a traditional Chinese Garden present.”

Parks Performance Manager Zealan Simpkins similarly acknowldeged the efforts and care needed to complete the project while maintaining a high level of authenticity.

“Working together with a local supplier we were able to source authentic Chinese tiles. Then we were able to find an exceptional tiler who was able to install them, keeping true to the original design while ensuring safe and correct application.”

The project had experienced a number of setbacks, with the COVID-19 pandemic making a visiting delegation from Suqian impossible for the foreseeable future.

“In these increasingly fraught times, building friendships and cultural understanding between nations will be increasingly important,” Councillor Soper said.

“To have a small part of Suqian in Invercargill and Invercargill in Suqian is a good thing for global understanding and recognition between cultures.”

The Suqian Friendship Garden is open to all those visiting Queens Park, and is located near the Winter Garden. 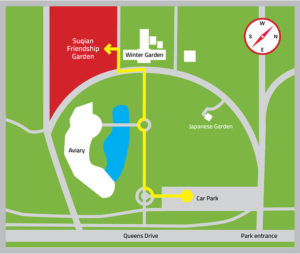