The Invercargill City Council is trialing a game that children can use on smart devices at specific parks and reserves in the city.

Magical Park, developed by GEO AR Games, is an app that can be downloaded via the app store or Google Play, and turns a normal urban city park into a digital fantasy land.

The game is available now at Elizabeth Park in Invercargill, to coincide with the Discover our Parks events happening throughout the city to mark Parks Week 2019.

Elizabeth Park is currently the only location in the city where the game can be played, with the potential for the game to move to other parks in the city after the three-month trial ends.

The app is free to use, and works using the devices’ GPS and camera functions, creating an augmented reality game so that children can still get out and about and explore outdoors while gaming.

Different to other augmented reality games, Magical Park is only available in a designated area of the park, where children can safely run and play.

GEO AR Games co-founder Melanie Langlotz said one of the key features of Magical Park was that it was absolutely safe for young children to play.

“We’ve got features built in which prevent kids from going out and running onto the roads, and the area has been health and safety checked by Council,” she said. 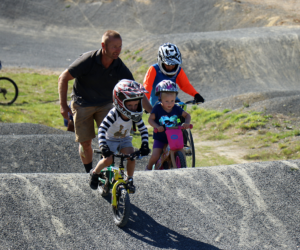 Magical Park, developed by GEO AR Games, is intended to get tech-loving children off the couch and out into their environment.

One of the founders of GEO AR Games, Melanie Langlotz, is a former Southern Institute of Technology student, who studied through the SIT2LRN distance learning scheme.

What you need to play:

Your device will need GPS, Compass, Accelerometer and Gyroscope. If your device doesn’t have these features, you won’t be able to download the app and a message will pop up saying your device is incompatible.

The app is about 125mb in size to download. We recommend you download it at home, or at one of Council’s free WiFi locations before heading to the park: Esk Street, Wachner Place, Queens Park near the playground, Invercargill Public Library, or the Civic Administration Building in Esk Street.

Once you’re at the park, you will need to switch on GPS and mobile data on your device.

3-10mb of mobile data is needed for each game within Magical Park, but only the first time you use it.

The game then runs via the GPS on your device.