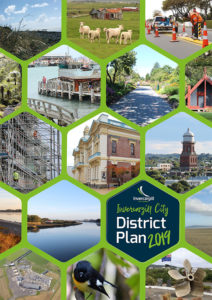 The Council, at its meeting earlier this month, gave final approval to the Invercargill City District Plan. The Plan is officially operative today, meaning that the 2005 District Plan has been replaced in its entirety.

A full review of the District Pan began at the start of 2011, with a Council Plan Group reviewing the 2005 District Plan, carrying out consultation with key stakeholders and the wider public, identifying any changes to the legislative framework and drafting a document.

The Proposed Invercargill City District Plan was put out for public consultation in 2013.

Submissions were considered during hearings held during 2014 and 2015. A few variations were made to the document over this time with the last hearing on those matters held in March 2016.

Decisions were released in October 2016. This was followed by appeals to the Environement Court, resulting in mediation and hearings held in 2017 and 2018. The final consent order from the Court was issued in February 2019.

Changes to National Planning Standards released in 2019 means some administrative work has been undertaken to transition our District Plan to the centralised planning template.

The District Plan is a living document, which means there will be ongoing amendments to the plan to reflect community and legislative changes.

Now the Plan is operative, we can be satisfied that these changes will be being made to a document that has gone through the full legislative process.

This review of our District Plan was time consuming because it was the first comprehensive review of Invercargill’s District Plan since the introduction of the Resource Management Act.