Since Saturday, March 23, detours and alternative access routes were implemented throughout the inner-city to ensure public safety during demolition of buildings on the corner of Don and Dee Streets, resulting in the closure of Dee Street from Don to Esk Street.

Alternative access routes included Don Street being temporarily two-way, and Esk Street’s one-way system being reversed so motorists travelled from Kelvin Street to Dee Street, instead of from Dee Street to Kelvin Street. 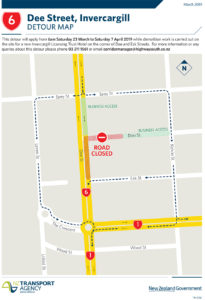 Temporary parking spaces have also been created on Esk Street.

The changes were put in place to maintain business access during this phase of the project.

“We were pretty happy to see Esk Street full of parked vehicles on Saturday,” he said.

However, it was important that both motorists and pedestrians took care and were considerate while using Esk Street.

“This is a significant departure from the norm, and it’s easy to fall back into habit and forget that traffic is now travelling in a different direction.”
Meanwhile, some BusSmart services are also affected, with bus stops being moved.

“We have had some issue with motorists not realising the bus stop outside the Library is not available for parking,” Mr Pearson said.

Mr Pearson asked that everyone remember these changes are temporary, with everything expected to return to normal from April 7.

Click here for more information on the temporary changes.