The Invercargill City Aviary’s Kākā population of four got a boost on Wednesday evening when a new breeding pair was introduced.

The Kākā pair come from Nelson’s Natureland where they were bred.

Moving them to the Invercargill facility will encourage a mix of genetics, minimise inbreeding and contribute to the national breeding programme.

Invercargill City Council Parks Performance Officer Bevan Cameron said the male bird from Nelson interacts with his keepers, but not with the female Kākā.

“We hope that the move will discourage this behaviour and the competition will encourage him to pair up and successfully breed. 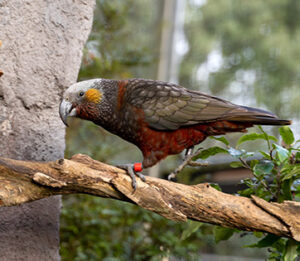 A successful breeding program is important as the number of Kākā are thought to be declining with the species being classified as nationally vulnerable.

Invercargill City Council Parks staff and Ngai Tahu kaumatua Michael Skerrett, of Waihopai runanga welcomed the birds to the Aviary when they were released into the native flight (Aviary facility).

Today the younger pair of the two current pairs will join the newcomers in the same flight.

Parks Performance Acting Manager Kate Gough said Kākā did not like to be alone.

“In the wild they are normally in groups, by having four flying together we hope they will be able to start exhibiting behaviour that is more aligned with natural behaviour in the wild.

Creating natural competition between birds and a natural hierarchy is important for socialisation of the birds,” Ms Gough said.

The public will have the opportunity to view the birds in their new home from today.