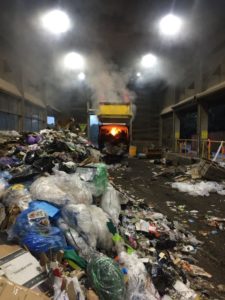 Careless disposal of hot ashes are believed to have caused a rubbish truck fire in Invercargill yesterday, with the quick thinking of the driver being credited for averting what could have been a deadly incident.

Bond Contracts representative Mark Simpson said the wheelie bin truck had only just started its run emptying rubbish bins in Derwent Crescent, Melbourne Street and Sydney Street when the driver noticed smoke coming out the back of the vehicle.

He immediately drove to the Invercargill Transfer Station, where the team were waiting to extinguish the fire, Mr Simpson said.

“We were lucky the fire wasn’t more serious, and it was only the start of the run. If the truck had been full, it could have been a very serious and dangerous situation”.

The cause of the fires is not known, however it is very likely due to a resident placing hot ashes in their bin.

“This is not the first time we have had a fire in the wheelie bin truck,” Mr Simpson said.

“We even had a fire in a recycling truck last year.”

Fire and Emergency New Zealand Southland Fire Risk Manager Murray Milne-Maresca said it was absolutely essential that people stopped and thought through what they were going to do with their ashes. 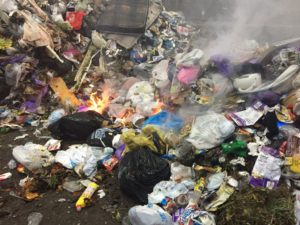 “The problem we’ve got now with winter coming on is people are taking the ashes out of their fireboxes and rushing outside because it’s cold, throwing them in their wheelie bins or on the ground next to the woodpile – and that’s how fires can start. People can lose everything because of a moment’s inattention in their haste.”

“We will have more fires because of it, because people aren’t thinking.”

Mr Milne-Maresca said people must transfer hot ashes from their firebox to a metal bucket or container with a lid to prevent the wind blowing embers elsewhere, and leaving them there for at least five days to cool.

“We also recommend that after those five days, people wet the ashes before transferring them to their wheelie bins to really make sure they are completely extinguished.” 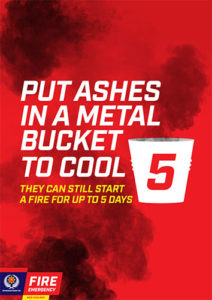 “We have had that before – someone vacuuming up ashes and putting their vacuum away, starting a fire,” he said.

Southland had the highest number of house fires per capita, Mr Milne-Maresca said.

“We have more house fires than Auckland, and as one of the busiest Fire Investigators in the county, I’m calling on you for help – we can all change this.”

“If you put hot ashes in your wheelie bin, it may cause a fire and melt the bin, or as in this instance, set the wheelie bin truck alight.

What should you do with ashes?