Southland’s gross domestic product (GDP) fell by 9.9 per cent for the year ended March 2015, due to a decrease in the agriculture industry – mainly dairy cattle farming. That  followed a GDP increase of 11 per cent in 2014, led by agriculture.

The economies of 11 of New Zealand’s 15 regions increased in the latest regional GDP figures from Statistics New Zealand. 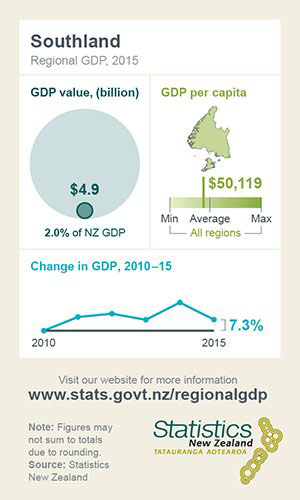 From 2010–15, Southland’s economy increased 7.3 per cent, led by the transport, postal, and warehousing industries. In 2015, Southland accounted for 2 per cent of New Zealand’s GDP.

Auckland and Canterbury had the largest increases in nominal value (today’s dollars and unadjusted for inflation) in gross domestic product by region.

Auckland’s contribution to total GDP for the year ended March 2015 was 36.6 per cent. Canterbury contributed 13.6 per cent, with Wellington narrowly behind at 13.5 per cent. The smallest contribution was from the West Coast region (0.7 per cent).