EARLIER this year, in March, marked one year 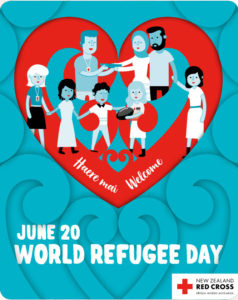 since Invercargill became home for many Colombian refugees.

Next week, Thursday, June 20, is World Refugee Day. Here are three ways anyone can support World Refugee Day:
1. Volunteer your time with a community group or organisation supporting refugees.
2. Donate to a community group or organisation supporting refugees.
3. Be a friendly, supportive Southlander! Be kind and welcoming!
New Zealand Red Cross caught up with some of our newest Kiwis a year after they settled in our city.

“A country of opportunities”

GIGGLES and laughter can be heard from outside a typical white Kiwi weatherboard house in a quiet suburb of Invercargill. If you stand close enough, you may catch a few English and Spanish words being spoken inside the home.

It is inside this warm and inviting house that Albeiro, his wife Edilia and their three children, Carolina, David and Karen, are rebuilding their lives after fleeing violence in Colombia. One year ago, their lives changed radically – the five of them moved to New Zealand, a country they knew very little about. They were among the first former refugees to settle in Invercargill.

It is a typical evening for the new Kiwi family. Their three Red Cross Refugee Support Volunteers, now life-long friends, are also there.

Everyone is gathered in the lounge area and listening attentively to one of Albeiro’s many encounters with their friendly neighbour.

He had no idea his neighbour knew Spanish or had been practising to say hello, too.

Albeiro’s laugh is contagious. Despite the language barrier, his passion is clear, making anyone he interacts with wanting to listen to his stories. Speaking English is still a big challenge for Albeiro, but it isn’t stopping him from being very happy in Invercargill.

“This is a country of opportunities. If you have dreams here, they can be fulfilled,” says Albeiro.

Albeiro is certainly making the most of these opportunities. With the help of New Zealand Red Cross’ Pathways to Employment, Albeiro has found full time employment.

He works for Yunca, a local heating manufacturing company. Yunca was struggling to find skilled and hard-working people, so it made sense to work with Red Cross to find the right candidate.

When Red Cross staff brought Albeiro to the business, he was hired on the spot. “When Albeiro came in, we took him through the factory,” says Kylie Lewis, Yunca’s National Sales Manager.

“He was interested, he clearly showed that little sparkle in his eye that he really wanted to get his hands dirty and come and work here and have a crack. He’s just been fantastic, really. He’s awesome.”

The team at Yunca is very pleased with Albeiro, so much so that they have now employed Elkin and Robinson, two other former refugees now living in Invercargill.

“We definitely say [with] no hesitation they are very keen and willing to work. And giving them the jobs after coming to New Zealand, you know, it’s been a huge journey for them. This is life changing really, for them. It helps them become Southlanders quicker, doesn’t it, or Kiwis, you know?” says Kylie.

Albeiro’s youngest daughter, Karen, is also adapting to the Kiwi lifestyle. She was impressed when she found out that schools in New Zealand use tablets, which means she doesn’t have to carry too many books. She also feels like school provides a good learning environment.

“For new children who come to the school, they don’t need to worry about having friends or being in a school

because the teachers have a lot of patience, they help you, they understand you and they explain it again. My friends also have patience and it is easy to have friends,”says Karen.

Carolina, Karen’s older sister, has also been busy finding her feet in Invercargill. She has already finished her English classes at the Southern Institute of Technology (SIT) and has made astonishing progress with her English. Within less than a year of learning, Carolina has learnt to speak fluently.

Back in Colombia, Carolina had almost finished her studies, but these qualifications are not recognised in New Zealand, so she will need start from the beginning again. However, this is not stopping her from pursuing her dream to work in business administration. Since living in Invercargill, she has been working very hard to achieve her goals, and her determination and patience
are an inspiration.

“I don’t mind starting from the beginning. Now I am living here – it’s a new beginning,” says Carolina.

“Red Cross was very good. The team asked me what I wanted to do. I said I wanted to keep studying, but they explained I needed to improve my English first. So, I asked to gain work experience in the meantime, in an office environment, so this would open doors for my life here in New Zealand. They helped me find this job, it’s very good.”

Carolina is starting a payroll course at SIT for four months and through the help of New Zealand Red Cross’ Pathways to Employment team, she is interning with H.W.Richardson’s payroll department. She goes to the office once a couple of times a week to gain work experience and receive mentorship.

“I really enjoy it here. My manager is very nice and makes me feel comfortable. She teaches me a lot of things and has a lot of patience. I’m learning a lot – about working for a Kiwi business, office environment and payroll,” says Carolina.

Renee van Geuns, H.W.R’s Payroll Supervisor, says Carolina has picked up things well. “I can’t believe how quickly she’s going through some of the work, so I always have to keep thinking of new things for her to do.” Reece Oliver, H.W.R Group’s Financial Controller adds: “From what we’ve found so far, people who are coming into the community are really driven to be involved and to better themselves, and to be involved with that from an employer’s perceptive, but from a personal perspective, is really gratifying and quite uplifting. It’s
been a great experience.”

Carolina was also welcomed with open arms by Southland Radio, which was keen to support former refugees making Invercargill home. Carlos, another former refugee from Colombia invited Carolina to join his radio show ‘Sonidos Latinos.’ Carolina enjoyed it so much that after a few months, she has started her own show with her friend Adriana. Every Monday afternoon, Carolina takes over the studio of the local radio to host ‘Frecuencia Latina’ [‘Latino Frequency’], a music show to showcase the Latin American culture – from music to news, interviews and chats in Spanish.

The family is grabbing all opportunities available to them and for Debbie, Gerry and Mario, their three Red Cross Refugee Support Volunteers, being part of the family’s journey and sharing their successes has been a beautiful experience.

“Your heart feels quite warm… watching their progress over the year, and we can’t take any credit, because these people have worked so hard themselves. I really admire their courage and strength. Every success they have, just feels so wonderful and I am so incredibly proud and privilege to be part of their journey really,” says Debbie with a bit of emotion.

Red Cross Refugee Support Volunteers are the first local friends the families have on arrival. They help families find their feet, do their first shop, enrol in school, read their mail, make their way around the city, and so much more. For volunteers, it’s a unique experience to help a family settle in.

“With this work, you become lifetime friends. Invercargill is not a very big place… You know, you’re friends for life, that’s the joy in it. It’s become a labour of love, and I just continue to do it until I am not needed,” says Gerry. Debbie adds: “You’ll gain far more than you’ll ever give.” We are celebrating one year since Invercargill welcomed the first former refugee family to the city. Within one year, 88 new Kiwis, including Carlos, made Invercargill their new home.

New Zealand Red Cross is the primary provider of community refugee resettlement programmes in New Zealand, supporting and empowering new Kiwis as they rebuild their lives