Invercargill City Council has received $680,000 from the Provincial Growth Fund for the restoration of seven important war memorials.

Below is information and resources about these monuments. 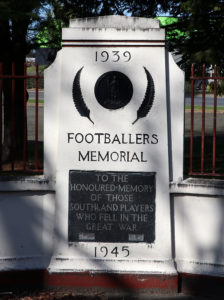 These memorial gates at Rugby Park were officially opened and dedicated on 7 September 1924 during what was described as an impressive service with a large crowd in attendance.

The Mayor of Invercargill Mr Andrew Bain then unveiled the two memorial stones. The gates were built to honour the more than 200 Southland rugby players (including two All Blacks) who were killed during the First World War.

Southland was known for its fit young rugby playing men and proportionally this was the largest loss of rugby players per region based on the population of the NZ regions at the time.

The memorial gates are made up of eight concrete pillars with wrought iron between them. The two main pillars are topped with a wrought iron cross and two other pillars contain the memorial stones. The pillar on the far right was altered after the Second World War to include the dates 1939-1945.

The gates are inscribed: 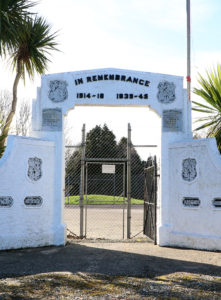 The Kennington Memorial is a war memorial of the First and Second World War at the site of what was Kennington School. The walls of the gates have marble inserts which are inscribed with the names of school pupils who later fought or died overseas. The gates are constructed from roughcast plaster and were unveiled in August 1927.

After the Second World War an arch was added over the two main pillars and the walls extended to enable the names of men from the school and wider district who had served to be added. One of the tablets is in remembrance of Brigadier James Hargest and two of his sons.

The memorial gates contain the names of 109 servicemen. 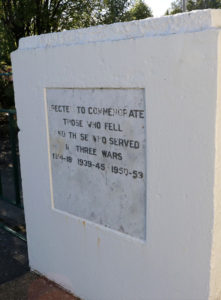 The Myross Bush Memorial Gates predate the current community hall on Myross Bush Domain, which has an honour board inside listing the names of the men from the community who fell and those who served in three wars.

The honour board includes the names of 51 servicemen of the First World War, Second World War and Korean War.

The Myross Bush Memorial gates are roughcast gates which were erected in 1954.

The Gates are roughcast with the plaques are inscribed: 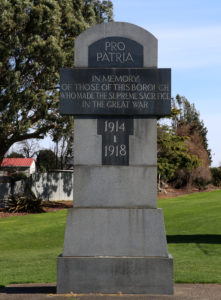 In 1956 the South Invercargill Borough Council amalgamated with the Invercargill City Council and the land and buildings but not the war memorial went up for lease eventually being sold to the ILT for 700 pounds plus a further 200 pounds for removal and re-instatement of the war memorial. Government Legislation was required for the ILT to purchase the land which was a Public Reserve.

Finding a suitable site for the memorial took sometime and the memorial lay abandoned and became damaged resulting in many complaints to the newspaper and council.

In 1961 the Invercargill City Council entered into a lease agreement with the Railways for a triangular piece of land on Elles Road which had been part of the Seaward Bush Railway Reserve. The fee was one peppercorn (if demanded). This is where the memorial stands today.

The inscription on the memorial reads:

“Pro Patria. In memory of those of the borough who made the supreme sacrifice in the Great War. 1914-1918” 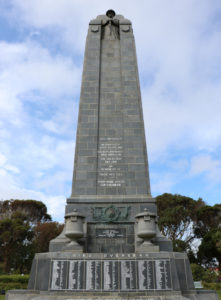 Following the end of the First World War the Fallen Soldiers Memorial Committee was formed to raise funds for a memorial to be constructed that would include the names of Southlanders who fought and died overseas in what was called the Great War.

After much discussion on its shape and where it was to be built it was decided to create the cenotaph in its location at Gala Street. This was based on the successful submission from Dunedin architects, Coombs and White.

The memorial took the form of a cenotaph similar to the one constructed in London, this design takes its name from the Greek words kenos, meaning empty, and taphos, meaning tomb.

With so many New Zealanders buried in other countries it provided a place for families and loved ones to grieve and pay their respects. The structure was built from Bluff granite which was seen as important as it was hewn from local hills.

The 10 ft statue of a soldier was cut and sculpted by G. Cancare.  Before the unveiling it was decided to include on the memorial the names of Southland nurses who also died overseas in war service.

The public were then asked to submit names and particulars of Southland men and nurses to be engraved on the memorial.

The memorial was unveiled by the Governor General of NZ Sir Charles Ferguson in 1925 in a ceremony that was described as simple but impressive with at least 6000 people attending including nearly 1000 returned soldiers.

The Southland Cenotaph holds the names of more than 2,000 people  from Southland who have died in overseas war service  since the First World War. 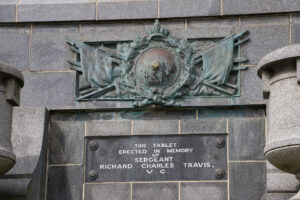 Richard “Dick” Travis was born in Opotiki where he grew up on the family farm becoming a champion horsebreaker. Christened Dickson Cornelius Savage he changed his name to Richard Charles Travis after he moved south following a family disagreement. Travis was working as a horsebreaker and farm worker for Tom Murray at Ryal Bush Southland when he enlisted in the army in August 1914 as soon as war was declared.  Joining the Otago Mounted Rifles he quickly gained the reputation of being the best horseman in the Rifles.

After serving at Gallipoli and Egypt Travis was drafted into the 2nd Battalion of the Otago Infantry when they were sent to the Western Front (France). During the First Battle of the Somme in 1916 it became obvious organised scouting parties were needed. Travis excelled at scouting beyond the trenches bringing in prisoners and information and dealing with snipers. He was described as “fearless but not reckless”.   Here he was awarded the DCM (Distinguished Conduct Medal) for gallantry in the field and promoted to sergeant, his tactical skills and exploits earning Travis the nicknames: “King of No Man’s Land” and “Prince of Scouts”.  At the Somme the appalling conditions made movement of the front lines slow and deathly. Huge numbers of soldiers died and went missing. In February 1918 Travis was awarded the Croix de Guerre (Belgium) and in May 1918 on the British Front east of Hebuterne (Somme) the MM (Military Medal) for excellent services rendered obtaining much valuable information when on patrol in No Man’s Land both in the evening and in daylight.

On July 24th 1918 The Otagos reached Rossignol Wood in the Somme. After blowing the wire blockage for the NZ attack on the German Lines, Travis charged and took two machine guns. For his actions at Rossignol Wood he was awarded the Victoria Cross “for conspicuous bravery and devotion to duty”. The next day the German Artillery opened up with a heavy barrage. Travis and 2nd Lieutenant Kerse were touring the trenches keeping up morale among the men when a shell exploded in their direction killing them both.   Both men were buried at Couin British Military Cemetery the following day. The inscription on the grave of Richard Travis reads: 9/523 Sergeant RC Travis VC; DCM; MM (Dickson Cornelius Savage) NZ Otago Regt. 25 July 1918 aged 34.

In 1919 the mayor of Invercargill, John Stead, called a public meeting to look at “perpetuating the memory of the late sergeant Travis VC and soldiers’ memorials generally”.  Also in 1919 a memorial to Richard Travis was unveiled at the Ryal Bush Public Hall along with the school Roll of Honour.

Named “The Fallen Soldiers Memorial” the cenotaph design was the winning entry in a design competition.   Built from Bluff Granite on its location in the Gala St Reserve it serves as a memorial to the men and women of Southland who lost their lives in WW1 and subsequent wars.  On a special plaque on the west face the most famous NZ soldier of WW1, Sergeant Richard Travis VC; DCM; MM is commemorated. Each ANZAC Day the Ryal Bush Community remember Richard Travis VC along with the men from their district. The Karori Rifle Club compete for the Dick Travis VC Trophy every year. After the war a painting of Sergeant Travis was commissioned by the government to hang in what was the Dominion Museum.

Richard Travis bequeathed his war medals to the daughter of his employer Tom Murray. They are now in the Southland Museum and Art Gallery. 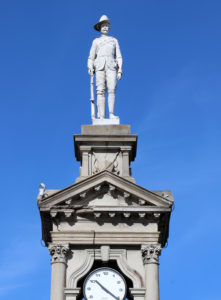 Troopers’ Memorial is an important war memorial of the colonial New Zealand period. Opened in 1908 it was created as a lasting reminder to the contribution of Southland’s war dead to the Boer War in 1900-1902.

The memorial was the first for the relatively new city of Invercargill with it only being established by Europeans in 1853 – this choice of a memorial would represent a future direction in how the growing city would be perceived by the world. Designed by Newton Vane, a prominent Dunedin architect, the Boer War memorial faced issues around identity and appropriateness.

The 24 names on the Troopers’ Memorial represent those killed during or from the Boer War. Southland sent a contingent of 273 men of its population of roughly 22,000 peopple, or 1% of the population.

This contingent (4th Contingent) arrived late to the staged battles of the early campaign and instead was sent to take part in the intense guerrilla fighting. The 3rd and 4th Contingents would be known as the “Rough Riders” as they were all largely civilian soldiers with little to no training.

The pillars were completed in the Aberdeen stoneworks of Garden and Co. (Scotland) and shipped to Invercargill, where they were erected under the supervision of city architect, John Rust. The interior work was formed through use of limestone. The memorial’s wrought iron features were the work of George Bissett. While being raised to its pedestal the statue was dropped and broken. The damage was luckily repaired by Carlo Bergamini of Dunedin.

The Troopers’ Memorial stands as a permanent reminder of New Zealand’s role in the Boer War and particularly of those Southland soldiers who were killed on active service. 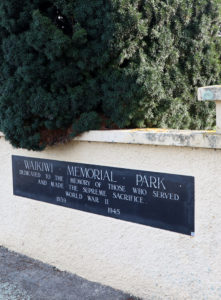 The Waikiwi Memorial Park gates were part of a project to recognize all the Waikiwi district men who served in World War II.

Five acres of the Waikiwi Domain Reserve were levelled, roading and fencing constructed and a pavilion built using funds raised in a Queen carnival plus a government war memorial subsidy. Domain Board members and helpers also contributed to the project.

In February 1954, after four years work, the Waikiwi Memorial Park and Pavilion were officially opened by Mr G.A.Herron MP for Awarua who was joined by several guest speakers and Reverend T.M. McDonald who dedicated the memorial.

A children’s play area was included in the park. In 1963 the Waikiwi Domain Board asked the Invercargill City Council to take ownership of the Domain and the Board was disestablished. The pavilion was removed in 1988.

The plaque is inscribed:  “Waikiwi Memorial Park, Dedicated to the memory of those who served and made the supreme sacrifice World War 2 1939-1945”